Tips and Activities for Phonemic Awareness

This post is long overdue! It's been brewing for a while. :) Phonemic awareness is a huge part of my kindergarten curriculum. I wanted to share with you some things I do with my students to strengthen their phonemic awareness. 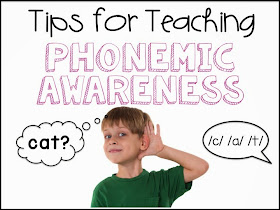 My introduction to phonemic awareness:

I don't want to be too long-winded but I have to start with a short  not so short story. When I was a new teacher, I used to tutor over the summer for a little extra cash. Little did I know that the value of tutoring was going to be far greater than the money. I learned so much from each student I tutored and having that opportunity to work one-on-one allowed me to really concentrate on each individual reader. The greatest lesson was early on, thankfully! I was tutoring a student who was going to be in first grade. She had finished kindergarten knowing all of her letters and sounds, but not yet blending words together. Her teacher had said she just wasn't ready. But then I found out that her birthday was actually early in the year, which meant that she was on the older end, not a younger student for incoming first grade. I sat down with her and after five minutes, I started sweating! I had my handy dandy magnetic letters ready to go. I put out three letters to make a CVC word. Here's what I got: "/c/ /aaaaa/ /t/.... tap!" Huh? Okay, let's try this again. I sounded it out with her. Still no cat. So I tried another and another. Then I tried just two sounds. She would give me words that were close and sometimes words that weren't even in the ballpark. I'm pretty sure I got turtle for rat. I remember thinking What the heck?! Afterward, I went straight to a mentor of mine. She said, It sounds like she's lacking phonemic awareness.  Of course. Yeah. Phonemic something. I totally paid attention to that when we studied that in teacher school. I dug out everything I had on the topic. It all came back to me. When I was learning about phonemic awareness, I didn't have that personal experience yet so it really didn't sink in. Learn your letters and sounds then start sounding out words. That's how we read, right? It was time for a wake-up call! Since then, I've been so interested in learning more. I've had several students since then with similar issues, with varying levels of ability. Here's the thing though. If we wait until first grade to tackle these phonemic awareness issues, it really puts our students at a disadvantage. I think nowadays we are more aware, so phonological awareness is being emphasized more. It is SO important. A lack of phonological awareness is one of those key indicators that there may be a reading problem later on. We need to be working with our kinders (and even before that) to make sure they have strong phonological awareness. Letter recognition and phonological awareness need to come first, before phonics instruction can begin! (Side note: This post is about phonemic awareness, which is a under the umbrella of phonological awareness.)

Another Personal Story: (You can skip this if you want to get to the goods)
Today I'm going to focus on phonemic awareness. You have all seen my son on this blog before. He often tries things out for me now. Last year, I was so excited to start teaching him to read. He mastered his letters and sounds super early so I thought reading would be easy for him. Nope. He so easily memorized letters when he was 2 and sight words when he was four. I didn't want to push him before he was ready, but he seemed ready because of these things. So I jumped right into CVC words. He really couldn't do it. So I stopped and waited. He was young, so there was no need to push. His little brain could memorize words but not blend sounds together. Still, it was early. But then we were playing a game with his little brother when I discovered he could not even rhyme! He had just turned five. Now I was worried. Rhyming is supposed to be one of the earlier phonological skills. How did I miss this?! I realized he did in fact lack phonological awareness. I guess I thought he'd get it naturally. We've read to him since birth and we have our fair share of Dr. Seuss books. Then I remembered that, for many children, phonological awareness needs to be explicitly taught. Nice job reading teacher mommy. I totally took for granted that he was solid in other areas. He is good at things that involve visual and spacial ability, BUT phonological awareness is all about sounds in words. To wrap up my long story, I got to work. I did rhyming songs and books and games. We did rhyming silly stories in the car every day. He got it. I am lucky because it didn't take too long. We moved into phonemic awareness activities next. Still I did not focus on phonics yet. Just sounds in words. After he developed that phonemic awareness, he was ready to sound out words. It came easy after that. He had the two components: letter knowledge and phonemic awareness to actually blend the words. We need to do this for our students too. Make sure they have the phonemic awareness first- then move to phonics.

Oh my word! This is the longest post. If you've made  it this far, thank you!

Humor me here. I want this post to be fully informative, so I'll be including details that you may not  need. Just in case, here we go: 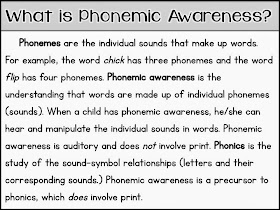 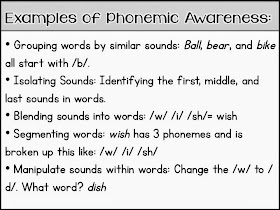 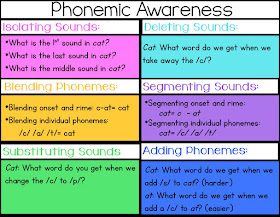 You can get a printable version of this here.

Now onto the goods. Here are some activities that we enjoyed doing together.
Fun Phonemic Awareness Activities: 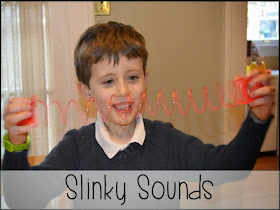 Right after this, I call on a classmate to guess his word. This game never gets old!

I have all these trains and tracks since I have two boys. I'm putting them to use! LOL! 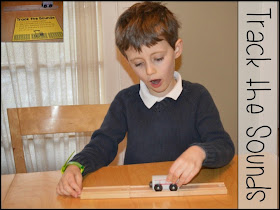 In this video, I'm showing you different ways to use this track:
1. Isolating sounds
2. Segmenting Sounds
3. Manipulating Sounds 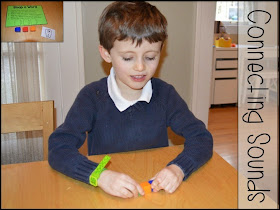 I know what you're thinking. Sarah, these are the same activities just with different manipulatives. Yep, you got it. Repetition for our students is good. They think they are doing something different when you put something new in their hands.

I use this one the most. You've seen it before. You can use anything to push the sounds: pennies, pom-poms, math counters, etc. Make it interesting. I've even used acorns. 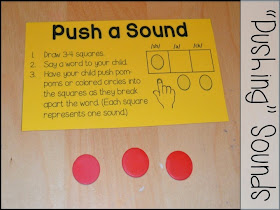 I like to change it up with different seasonal clip art, but you wouldn't have to. Again, I'm sort of tricking my kids into thinking it's new and different. :) I have a weird desire to make everything seasonal. I'm working on a set of seasonal phonological awareness activities for those of you who like to shake it up too.

I use these (from one of my phonemic awareness packs) with my small groups almost every day! I say a word and my students "push" the sounds. Then I ask the group to point to the sound that says --. It's a great warm-up to small group instruction. At first, I do the pushing and the segmenting so my students can hear it done correctly several times. 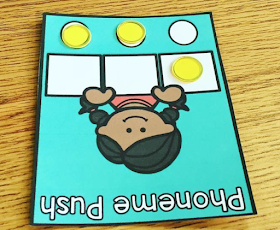 This is a favorite! Get a favorite stuffed animal or little puppet. I got this idea from this amazing teacher I worked with years ago in North Carolina. She taught me pretty much everything I know. Get your little puppet or stuffy. Tell your students that he speaks a funny slow language and you need help figuring out what he is saying. Ask questions like, "what is your favorite color?" Have your puppet answer, "/r/ /e/ /d/". Act really dramatic with the kids. A little dramatic flare gets their attention. Ha, ha. "What?! I can't understand you! Say it again." Have your puppet do it again. Then call on a student to "translate" for you. 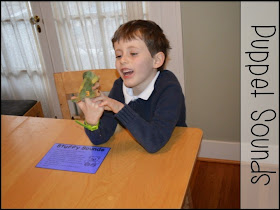 I already blogged about this a few days ago, but I wanted to include it here too. 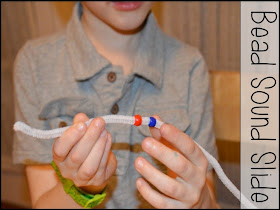 SitSpots are the best! You can use them in your classroom to hop out the sounds of a word! Sorry this video is so blurry!

I made a little "take-home" kit for some of the parents at my school. I ended up using these in my own classroom.  I printed the cards on colored card stock to make it prettier. :) The cards have ideas for parents and teachers on each card.  You'll only need to add a few extras to go with this. 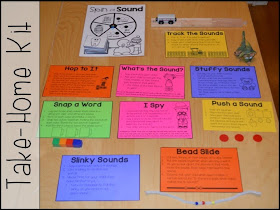 This Phonemic Awareness Intervention Kit can be used in your class with small groups or you can make it into a take-home kit for parents. I use it for both! You can use these activities with any words. I included a few picture cards and a wish list to get you started.

You can see more about this kit here:

Here are all of my phonemic awareness materials:

Small Phoneme Kit:
(I use this to send home to parents but you could also use it at school for ideas) 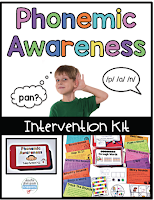 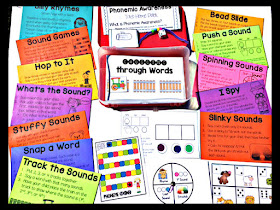 This is a huge pack of activities to laminate and use for RTI and small groups: 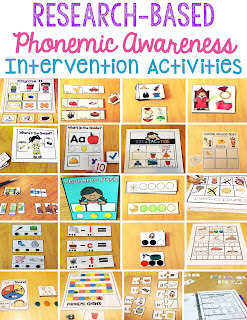 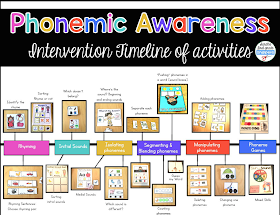 And this is similar to the pack above except it is ALL print and go. No laminating and no color. 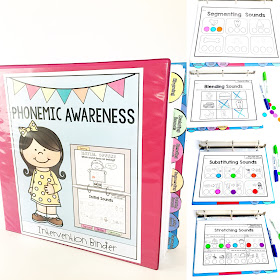 There is also a bundle where you get the kit for FREE! You can find these here.

I also have another detailed BLOG POST here. There are several tips on how to teach phonological awareness for the whole class.